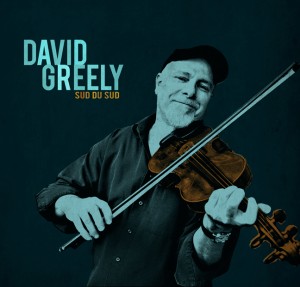 Give the Fiddler Some

“David Greely of Steve Riley & The Mamou Playboys is a mad genius, magic fiddling man. Like some cultural scientist conducting precious musical experiments in a secret laboratory, his new CD, “Sud du Sud,” explores the finer elements of Cajun and Creole music — the subtleties of which would easily get lost in the Cajun bars and dancehalls. In it he mines a cappella ballads, poetic narratives, intricate waltzes for a wealth of emotion and nuance. Filled with original compositions that go back to back with themes based on classic Cajun tunes, it’s a sophisticated journey. Buy it at Barnes & Noble or DavidGreely.com”

The Mamou Playboys’ David Greely reminds us of the fiddle’s forgotten legacy in Cajun music with this off-the-beaten-path collection of fiddle and other eclectic tunes that have recently come in touch with their “fiddle” side. A good portion of this is traditionally rooted, drawing heavily from the canons of Dennis McGee, Varise Connor and Wade Fruge?. In the spirit of McGee and lifelong duet partner Sady Courville, Greely enlists fiddlers such as Gina Forsyth, Joel Savoy and others in duets that are consistently intricate and impassioned. Greely takes the first lead but then generously swaps leads with his partner, which subtly shades the texture and mood of the piece. Additionally, he encompasses a few of the forgotten styles of Cajun music, including cotillions and polkas.

But as much as Sud de Sud is rooted in tradition, there’s also a welcome degree of progressive interpretation and hauntingly gorgeous originals. Two songs feature Linda Handelsman’s chord- outlining piano playing, allowing Greely to be unencumbered in his breathtaking expression. “Paul Junius Malveaux’s Tune” was adapted from a harmonica tune culled from the Lomax Archives and features an unobtrusive Brazilian hand drum as its only accompaniment. On McGee’s “Cotillion,” Greely ingeniously segues into his own composition, “Chatagnier,” with no discernible break in melody. There’s even a multi-layered string concerto (“Fantaisie Au Vermilion”)—a glorious departure arrangement- wise—that was composed by son Gustave, a Hollywood film composer. The fiddle’s role in Cajun music may have changed since the German accordion was introduced in the 19th Century, but relative to this domain, it still reigns.